The diversification of women’s social roles in Moroccan cities has not reduced their domestic responsibilities and workload.

Women—in response to their increased mental workload associated with the management of household food activities—are seizing urban opportunities to change their food practices. They are relying to a greater extent on ready-made foods, particularly for the late afternoon snack, or so-called cascrot, which is becoming increasingly substantial at the expense of the early evening dinner.

This reorganization of the daily meal pattern has impacts on household food consumption and nutrient intake, as well as on social relations.

Sustained urbanization has been under way in Morocco since the 1960s due to massive rural outmigration and the high birth rate in the cities, i.e. 7.8 children per family on average (Schaffar and Nassori, 2016). The urbanization rate reached 62.5% in 2018 (United Nations, 2018). This phenomenon is gradually reshaping Moroccan society, and cities are now emerging as an ideal venue for the development and propagation of new sociocultural models (Monqid, 2014). Women’s status within society and the family is changing in urban areas. Thanks to contraception, education, the media and/or access to paid employment, women have more opportunities to get out of the household and assert their individuality through new economic and social activities. Yet they are still socioculturally responsible for managing domestic work—having an outside job does not lighten their domestic workload, especially in the kitchen, where they continue to handle most of the work.

A Moroccan anthropology research team sought to gain insight into the implications of this phenomenon on family nutrition by conducting a study on food/cooking-related practices and representations of middle-class Moroccan women living in cities.

Cooking as a source of tension

Cooking accounts for a large share of Moroccan women’s household tasks. Women manage most family food activities, which represent a major daily investment in time, i.e. 2 h 26 min on average (Moroccan High Commissioner for Planning, 2014), energy and know-how. Overall they are responsible for meal scheduling, food stock management, menu planning and cooking. They are also expected to pass on affection, tastes and eating habits to their children at mealtimes, in addition to handling the dishwashing and cleaning. Cooking contributes to women’s daily mental workload and they often carry out this task alone—most interviewed women considered it to be a constraint and source of exhaustion.

Moreover, the women interviewed said they constantly have to contend with restrictions—sometimes contradictory—regarding food. For instance, they have to reconcile respect for standard cultural models (makla zwina, which means seeking pleasure through beldi, i.e. traditional food dishes) and striving to eat well (makla meziana, i.e. a quest to enhance nutrition through healthy food and a balanced diet). Many women also try to please the different family members by taking their individual food preferences into account. While men are generally attracted by beldi and homemade dishes (meat-based tagines), children and adolescents want to ‘eat differently’ (pasta, pizza, panini) or ‘eat at home like they would outside’ (makla dial zanka f dar). Finally, women are only able to manage family meals within the limits of their timetables (reconciling professional, family and personal time) and of their often tight budgets.

These many trade-offs were found to generate tensions for the women interviewed, especially since they increasingly yearn for better conditions in their different social tasks (free from routine housekeeping, assuming the nurturing mother role, keeping in shape, etc.). They thus often experience internal strife due to the discord between what they feel they should do as ’good mothers’ and what they can actually achieve within the bounds of their constraints.

Finally, women and their families seek to reduce these tensions by seizing the opportunities offered by urban life and adopting new food practices.

The Moroccan family diet is punctuated by four daily shared mealtimes: breakfast (ftour) (in addition to the morning snack that children take to eat at school), lunch (ghda), afternoon snack at home (cascrot, lgoté: a snack eaten by children after school) and dinner (3cha). In the city, these food organization strategies may vary according to the diverse range of family settings (e.g. presence of the extended family), socioprofessional situations (e.g. women’s paid employment) and urban livelihoods (e.g. distance between home and workplace). Yet new practices are emerging that are particularly effective in reducing women’s work. Family food activities are organized differently depending on whether they take place on weekends or weekdays.

Meals are relatively unplanned on weekends on account of the more flexible management of the family time and budget and the desire to enjoy leisure activities. Out-of-home food purchasing and consumption is a growing phenomenon amongst all social categories in Moroccan cities. Makla dial zenka (’eating out’) refers to the expansion of leisure and entertainment areas and the emergence of new food outlets: petrol stations, fish and chip shops, snack bars, fast-food outlets, neighbourhood pizzerias, mahlabat (dairies originally selling milk and other dairy products, but which now also offer juices, small sandwiches and cakes, and on-the-spot consumption), as well as mobile sales outlets. This out-of-home food consumption trend provides women with a temporary or periodic break in their daily kitchen duties. These new practices foster a consumption culture that differs from traditional domestic food consumption habits, which are now influenced by—and even compete with—new food products (such as pizzas and sandwiches) that are popular because of their taste and contemporary social standing. Weekends also provide an opportunity to be invited by the extended family, which lightens the meal preparation workload of the active women guests.

The food week is structured according to the timetables of family members (especially professional and school activities) and the household budget. Women to an increasing extent are resorting to practices such as freezing or subcontracting certain food-related tasks to facilitate meal planning and preparation. For instance, they may buy homemade products (e.g. bread) from people they trust, or takeout food from restaurants (e.g. snacks, pizzas, shawarmas, etc.). Opting for takeout saves women time while pleasing their children. Conversely, women can also adopt a makla dial zanka f dar (‘eating at home like outside’) strategy, whereby ‘outside’ products that are popular with children and adolescents are prepared and consumed at home (e.g. pizzas, sandwiches or paninis). Although this practice may be out of line with some culinary rules and representations of what is healthy, it pleases members of the family and gives women the feeling that they are in control of their children’s health by offering them homemade food.

Finally, the study revealed a reorganization of the daily meal pattern. This phenomenon is particularly clearcut with regard to late-day meals, i.e. a lighter dinner and a more substantial cascrot snack. Dinner is increasingly considered as a meal-on-the-go—women describe it as a ‘thrown-together’ snack, sometimes made from leftovers from the previous day’s lunch. The dinner meal workload is reduced by offering a bulkier late-afternoon cascrot between lunch and dinner, or it may even replace dinner. The cascrot is very popular with children and has the advantage of requiring little preparation while generating less stress and expense for women.

Changes prompted by the cascrot snack

The bulkier cascrot and leaner dinner have several implications: • on the foods consumed: cooked dishes—increasingly uncommon at dinner—are replaced at the cascrot by a combination of individual sweet and savoury foods, which are sometimes also present at breakfast. The cascrot menu thus offers a choice of different drinks (hot or cold), breads, cakes (msemen and harcha) and pastries (homemade or purchased) as well as several types of side dishes, such as jam and commercial cheeses (’The Laughing Cow’, ’Kiri’). It can also include ’outside’ homemade or purchased products (pizza, panini, etc.). Yoghurt, fermented raïb milk, or drinkable yoghurt may be consumed as a snack by teenagers outside the home, often with cookies. The cascrot thus includes many roumi products (’industrialized’ or ’imported’). • on social relationships: the cascrot is a convivial meal that is described as ’cool’ and free of constraints (from school or work). It is a prime occasion for social interaction. Impromptu visits are therefore welcomed. It is a moment when family members, especially women, relax. Men—for professional reasons or out of habit—are often absent during home snacks, which they may have outside the home. • on the meal sequence: although it is a time of collective consumption, the cascrot is characterized by individualization of family members’ food choices. This phenomenon is fostered by the use of products for individual consumption (cakes in individual packaging, yoghurts, etc.) and by the emergence of ’self-service’ behaviours at home, with each person consuming foods according to his or her tastes, preferences and presence. • on food supply channels: the reconfiguration of end-of-day food consumption and the increased popularity of out-of-home consumption prompts visits to new urban food outlets. This is the case of the mahlabat dairies, known for the quality of their juices and the freshness of their ingredients, which are becoming increasingly popular with families, as well as with youths and men who may procure their supplies independently. 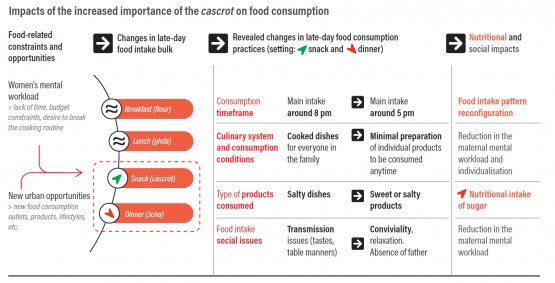 This study revealed that the changing social roles of women associated with urbanization is a key to understanding the dietary changes under way. To be able to cope with the mental overload caused by the management of family food activities, women are reducing tensions by taking advantage of urban lifestyle opportunities, i.e. benefiting from the commercial food supply, eating outside the home, changing the household food consumption timeframe based on the urban lifestyle, etc. Living in the city thus provides a lever for women’s emancipation from family food tasks.

This study also revealed the emergence of a trend regarding the reorganization of daily food consumption patterns while also highlighting the nutritional issues involved. New categories of food are gradually taking precedence during some meals, e.g. sweet foods included in the afternoon cascrot snack. From a methodological standpoint, these results suggest that the scientific community should focus closely on temporal food consumption patterns as a determinant of food consumption and thus of the nutritional status of communities, alongside other more conventional determinants linked to the socioeconomic characteristics of households.

This study was conducted from October 2016 to July 2017 in the Moroccan cities of Casablanca and Meknès [1]. The research was based on a field survey on eating habits conducted among 40 middle-class Moroccan women. It consisted of a series of in-depth personal interviews and discussions with five focus groups. The women interviewed were 25 to 45 years old, with different educational levels and occupational activities. Although the food issue seemed trivial to them at first glance, these women took the interviews seriously and were highly involved. Meanwhile, 10 interviews were conducted with men in the 27-45 age range, and three focus group discussions were conducted with adolescents. In contrast to the women, the men seemed to be less involved, as food did not seem to be a concern for them. The interviews were conducted in Arabic, transcribed, translated into French and analyzed.

[1] The data presented in this article are from a research study on food styles in Moroccan cities involving a collaboration between University Hassan II of Casablanca, the French Agricultural Research Centre for Development (CIRAD), Centrale Danone Morocco and Danone Nutricia Research.