Food system largely relies on market, even in rural areas.

The economic value of urban and rural markets has become roughly equivalent.

Food issues can no longer be mainly focused on cereals.

In order to achieve a better understanding of food security issues, many efforts have been made in recent years to improve statis-tics on food production and prices, and, in particular, of grains and cereals, given their significant share in the average caloric intake of West Africans. However, fewer studies have been published on food consumption itself, including the practices and representations associated with it, despite the fact that national studies on household consumption are conducted in order to generate macroeconomic indicators. Data collected by national institutes of statistics are thus a valuable tool for the development of food politics. On this subject, CIRAD and Afristat have collaborated with the Agence Française de Développement in order to make use of such data.

Markets now play a dominant role in food consumption, in both urban and rural areas

Depending on the country, food purchases amount to between two-thirds and nine-tenths of national consumption. The share of purchased food is of course very high in cities, amounting to more than 80% of food value in secondary cities, and more than 90% of food value in capitals or major cities. Even more surprising is the dominance of market supply in food consumption in rural areas. Self-agricultural production accounts for less than half of the economic value of food consumed. Quite far, indeed, are we from the past when rural diets were essentially provided for by subsistence agriculture. The food system has become almost completely monetized. As a result, urban and rural households alike have now become sensitive to fluctuations in food prices, and not only to the amount of food they produce, for their own supply.

Such a situation can be explained by two phenomena. First, (i) rural areas are not just inhabited by farmers and their families: they also include small towns (in Nigeria, for example, popula-tions in centres of up to 20,000 inhabitants are classified as rural) where the range of jobs is thus not restricted to agriculture—people work at jobs such as small-scale food processing, artisanal construction, repair and maintenance, trade, transport, education, health services and the like—and they buy their food at markets. Second, (ii) farmers sell part of their production either within the country or for export. Income also circulates by way of remittances by family members living in the city or abroad (Losch et al., 2012). People in rural areas combine their various sources of income to purchase a significant part of their household food supply.

Such trends in rural food supply chains have a non-negligible impact on food security because even though people in rural areas have more opportunities than city dwellers to grow their own crops, they are also more vulnerable to food price changes. If increases in the cost of food are greater than increases in the income earned from production, food security can be affected. Rural citizens are more at risk because their budgets tend to be modest. As a result, issues with food security in rural and urban areas tend to converge with the increasing importance of food markets and food prices.

By converting the value of the domestic market to dollars according to the average rate of currency for the year of the study, comparisons can be made with exports markets for agricultural products. In terms of economic value, meeting domestic market demand is much more lucrative than exporting food products for every country studied, including for major agricultural exporters such as Ivory Coast and Cameroon (see Graph 1). 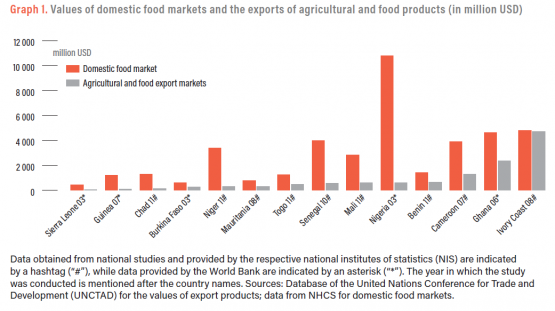 Results show that domestic commercial opportunities are much higher than export-related opportunities. Internal markets do not generate foreign currency earnings but they are growing on a series of often small-scale activities that include agricultural production in addition to transportation, storage, processing, distribution, catering, and a number of intermediate consumption practices (energy, materials, packaging, and services). These activities are often performed by women, and are often mixed with agricultural or domestic work. They are not well-recognized by public institutions, and constitute an “informal” part of the informal economy that is neither professionalized nor able to benefit from bank financing, external advice, or appropriate legislation, despite the significant role they play in job creation and in food security (Broutin and Bricas, 2006).

Domestic food markets are not exclusively urban. Rural food markets are far from being negligible: they often comprise close to one half of total national markets. A persistent idea that must be set aside is that internal food markets are essentially urban and that local agriculture must re-attempt to conquer these. In fact, now it is necessary to pay more attention to rural markets, as much for their exchange value for local farmers as for the households that count on them for their own supply. Whether urban or rural, internal markets are the main driver of agricultural development.

Food issues cannot be exclusively focused on grains and cereals

Economic values of food products destined for household consumption can be classified into three wide categories: – The first consists of starchy staples, which provide a significant portion of the of the energy intake: grains and cereals (millet, sorghum, maize, rice, wheat, fonio), roots (cassava, taro, cocoyam), tubers (yam, sweet potatoes, potatoes) and plantain banana. At a national level, these products make up between 40% and 50% of the economic value of food consumption (see Graph 2). – The second consists of animal products: meat, fish and seafood, dairy, and eggs. The consumption of these products represents between 15% and 30% of the economic value of food consumption, depending on the country. – The third consists of “other” products, such as sauce-related products (vegetables, oils, pulses, and nuts) and sweet products (sugar, fruits, and non-alcoholic beverages), as well as products that are bought out of home but consumed at home. Consumption of such food products amounts to between 30% and 40% of the total. Food security debates are often focused on grains and cereals, but these products make up less than half of total food consumption economic value at national level. However, from a nutritional perspective, grains and cereals provide two-thirds of the caloric intake. Animal products and other products are equally significant to agricultural development. In fact, the latter categories are even more important for farmers, especially considering the increasing market share that they represent. Moreover, the nutritional component of such products is crucial in a context in which malnu-trition from lack of protein and energy sources is increasingly rare and now primarily encountered in situations of crisis or conflict. The main nutritional issues today lie in the reduction of chronic malnutrition, caused by imbalances in the micronutrient profile of dietary consumption (iron-deficiency anemia, vitamin A, zinc, and iodine deficiency). Many of the foods listed in this analysis contain essential nutrients such as iron, vitamin A, and fibre, which people’s diets often lack despite providing enough, if not too many, calories. The new diseases—like obesity, diabetes, and cardio-vascular diseases—have become a public health issue, particularly in cities: according to the World Health Organisation (WHO), in 2008 in the regions studied, the percentage of overweight people was 26.8%, and the obesity rate was 6.7%. Such new realities call for changes in approach, away from one that is exclusively focused on caloric intake.

The food system in West Africa has changed in recent years, indeed more rapidly than what many observers would have believed. Market supply is now the main source of food for households. The domestic food market is now much higher in value than export opportunities. Markets are diversifying, as are the types of food consumed, and issues of caloric intake are less significant than nutritional balance. Grains and cereals are less important today than they were in the past, having been succeeded by other types of food. Such observations call for a revisiting of methods of research and statistics, which must be focused on understanding consumption practices and their representation. Issues are both nutritional and economic, linked to the development of activities of mediation between producers and consumers (such as transportation and trade). Development on this level requires better knowledge of the market: the data from NHCS is a rich source of information on food politics, but it remains underused. Issues that accompany changes in food consumption patterns are both social and cultural. In fact, food is an important medium for social interaction and identity, and changes in consumption are not limited to the satisfaction of basic biological needs. Society itself is concerned. Understanding rapid changes in this sector requires a multidisciplinary approach to food provision and consumption.