This index is based on open access statistical data. While it is therefore incomplete, it gives some indication of the various forms of precarity observed in territories.

In the Hérault département in France, the index shows that municipalities with multiple factors of food insecurity are mostly located in the rural hinterland. They are often far away from food aid organizations, which tend to be concentrated in urban areas.

In France, food insecurity in a territory can be assessed based on the number of food aid [1] beneficiaries in that territory, using the figures provided by major accredited organizations. However, not all organizations provide comparable data, and some have no data at all. Moreover, part of the population in a situation of food insecurity does not take up these aid schemes, which are also geographically unevenly distributed. Thus, not only do the current statistics overlook part of the food insecurity that exists, but they also do not allow for a comparison between territories. There is therefore a strong need for public policy as well as aid organizations to better assess the extent of this insecurity across different territories.

Characterizing the different factors that lead to food insecurity is also important. Several studies have addressed this issue. Some of the indexes they propose are operational, designed to be appropriated by the actors in a given territory [2]. However, these studies are limited by the lack of availability of certain data and/or difficulties in accessing them (data on homelessness or certain health data). Other studies propose an “ideal” index, taking into account all the dimensions of food insecurity but without factoring in the existence and accessibility of data [3].

The aim of the work presented here is to develop an index that takes into account the multi-dimensionality of food insecurity, and can be appropriated as well as reproduced by local public and civil society actors in any territory.

This work is based on a review of the scientific literature on factors of food insecurity and an analysis of existing indexes. In order to ensure that the index developed can be appropriated and reproduced as widely as possible, it draws solely on open access data. Its scale is that of a municipality, given the large quantity of data available at this level and the value of characterizing the situations of rural areas. Moreover, this scale involves several levers for action surrounding access to food, such as school catering or the measures taken by municipal social action centres (CCAS, centres communaux d’action sociale).

The index considers four dimensions of factors of food insecurity, namely their monetary, socioeconomic, health, and mobility dimensions. For each one, existing and accessible indicators have been standardized from 0 to 1, with 1 being assigned to the most adverse food accessibility situation. The average of these indicators is calculated for each dimension and the sum of these averages provides the index of presumed food insecurity. Thus, a high index indicates the significant presence of food insecurity risk factors in a municipality.

A second calculation method sheds light on the varying weight of the different risk factors depending on local contexts. For each dimension, a score of 1 was assigned to the 25% most disadvantaged municipalities. This allowed for a more precise characterization of the situation of each municipality in relation to the others, and highlighted the types of difficulties most present locally.

Quantifying the various risk factors: the choice of dimensions and indicators

The requirement that the proposed index be operational explains why certain crucial dimensions, such as the diversity and quality of the food supply in the area, are not included. Moreover, the measurement of food well-being and of individuals’ sense of dignity or social exclusion is still little explored in the literature, and could not be found at municipal level. The following four dimensions were thus selected for this index (Table 1). 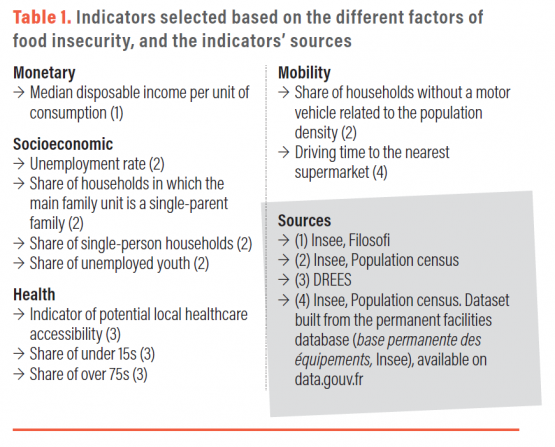 Monetary dimension For the most disadvantaged households, the cost of food is an obstacle to accessing sufficient, varied and quality food. This dimension was taken into account by using the median disposable household income. Other monetary indicators, such as the poverty rate, were not available for many municipalities due to statistical confidentiality [4].

Socioeconomic dimension Food is a vector of sharing and social interaction. Isolation and social exclusion can result in less balanced meals and undermine their hedonistic dimension (Ramel and Boissonnat, 2018). Certain family situations (widowhood, single parenthood) can also discourage cooking and contribute to poorer diets. The following indicators were selected: unemployment rate; share of households in which the main family unit is a single-parent family; share of single-person households; share of unemployed youth.

Health dimension Diet is recognized as a major determinant of health. As there are no available data on population health at municipal level, an indicator of healthcare provision was included [5]. This choice was informed by the hypothesis that the more developed healthcare access is in a territory, the easier it is to disseminate prevention messaging on the links between food and health. Age indicators were also included to take into account the specific nutritional issues impacting the elderly and the young (Paturel et al., 2019).

Mobility dimension Some households may only have a restricted choice of places from which to get food, due to their limited mobility (Paturel et al., 2019). As private cars are the main mode of transportation in France, an indicator of the share of the population without a motor vehicle was included. However, in order to take into account the significance of other modes of transportation in urban areas, this indicator was related to the population density. Finally, the time required to access the nearest supermarket was included, as this is where nearly three quarters of French people’s food spending takes place, and supermarkets are often located near other shops . The time required to access food shops therefore appears to be a discriminating criterion when coupled with other factors of vulnerability. For people with restricted mobility, the distance to shops can be a major barrier to accessing food.

Application of the index in the Hérault département

The index thus developed was used at the scale of the municipalities of the Hérault département (Figure 1). 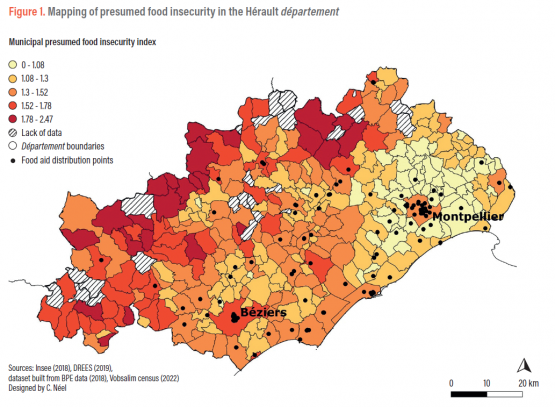 This map reveals significant spatial disparities. The municipalities where food insecurity factors are most present are mainly situated in isolated rural areas. These results were compared with the geographical location of food aid distribution points , showing that the municipalities with the highest levels of presumed food insecurity are also often far from food aid organizations, which are concentrated in urban areas. Conversely, the municipalities with the lowest index are located in the peri-urban areas of Montpellier (and Béziers to a lesser extent). These findings thus suggest that the specificities of isolated rural areas should be taken into account in the fight against food insecurity.

A second calculation method (see Methodology) confirms this result (Figure 2). It shows that just 11 municipalities, all in the rural hinterland, make up the 25% most disadvantaged municipalities for the four dimensions. For three of the four dimensions, the most vulnerable municipalities are also concentrated in the rural hinterland. The breakdown by dimension further shows that vulnerability in urban areas (Béziers, Montpellier, part of the coast) is mainly associated with monetary and socioeconomic difficulties. 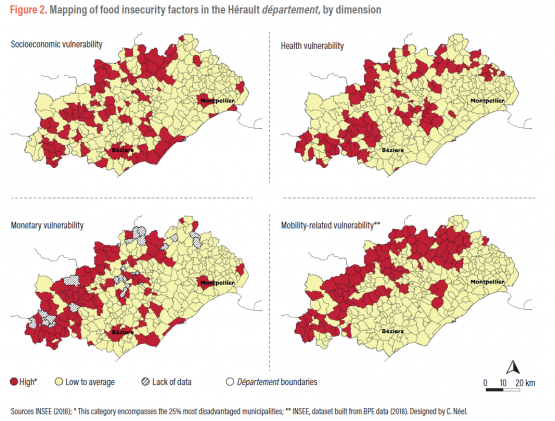 This mapping, which highlights the fragility of rural areas, must however be put into perspective in relation to the distribution of the populations concerned.

While approximately 20% of the municipalities in the Hérault département (n=71) have a high or very high index (above 1.52), these territories only account for 11% of the département’s population. In terms of public policy, this entails trade-offs between two antagonistic logics, namely between prioritizing coverage across the territory and maximizing the number of target populations.

This method is intended to serve as a tool for local public and civil society actors wishing to carry out a diagnosis of food insecurity challenges in their territory in order to implement suitable actions. To facilitate its appropriation and dissemination, the development of an online platform directly providing the index value for a given municipality is currently being envisaged [6].

In parallel, the index could be improved to better take into account the multi-dimensionality of food insecurity (quality of the food supply in a territory, food well-being, dignity, social exclusion, etc.). Moreover, it should be completed with a second index to make the analysis more relevant for urban areas and better reflect intra-municipal disparities.

This work was carried out by the Unesco Chair in World Food Systems in collaboration with INRAE (UMR Innovation). It was discussed both with the steering committee of the Vobsalim34 project, which includes representatives of the Département-level directorate of employment, labour and solidarity (DDETS, Direction départementale de l’emploi, du travail et des solidarités), the Council of the Hérault département, the Montpellier municipal council and Montpellier Méditerranée Métropole, and with about 50 actors from the département involved in food solidarity actions (municipal social action centres, civil society organizations, researchers, etc.).

[1] The purpose of food aid is to provide foodstuffs (prepared meals, food parcels, products in social and/or solidarity grocery shops, for example) to people in a situation of economic or social vulnerability, and it must be coupled with the offer of support (Art. L.266-2, Code de l’action sociale et des familles).

[2] For example: index designed by Crédoc and Ansa for the Île-de-France Regio (ansa-precarite-alimentaire.credoc.fr).

[4] Statistical confidentiality renders some indicators unavailable for less populated municipalities, as the law prohibits the dissemination of data that would allow for a particular individual or household to be identified.

[6] In collaboration with Le Basic (https://lebasic.com/).