Home > Publications > Policy Briefs > 17/ What levers do municipalities have to shape foodscapes?

17/ What levers do municipalities have to shape foodscapes?

They also influence shopper traffic in retail areas via the design of public spaces and their transport policies.

Prior to modifying the foodscape in a neighbourhood, municipalities must gain insight into what shopkeepers and users expect so as to prioritize its actions in a concerted way.

In France, food is not commonly within the scope of urban planning actions (Brand et al., 2017), despite the fact that local shops—particularly food outlets—contribute to the social life and vibrancy of urban neighbourhoods (Gasnier and Lemarchand, 2014). These retail dynamics seem to be largely driven by private actors who usually own the land and premises. However, an analysis of trends regarding food shops in different areas of Montpellier identified a series of public action levers that could have a direct impact on shops, but also an indirect impact via the management of public spaces and transport policies.

Intervening on the occupancy of commercial premises to preserve food outlets

When new residential areas are planned via concerted devel-opment area (ZAC) procedures, commercial premises are generally designed to ensure the neighbourhood vitality. They include bakeries, pharmacies, grocery shops, bar-tobacco shops, etc. Yet it may be complicated to ensure the long-term presence and viability of these outlets.

Upstream, the cost-effectiveness rationale of urban development often dictates the fate of ground floor premises depending on their location. Planners may sell or rent them to non-food businesses if they are deemed more profitable or to enhance the attractiveness of housing being sold nearby. Planners may also hinder the establishment of a restaurant or bakery by prohibiting—under co-ownership regula-tions—any cooking areas or ventilation ducts on in ground floor areas.

Local authorities may strive to ensure the presence of food outlets by retaining ownership of certain premises so as to be able to select successive tenants and adapt to potential transformation patterns of the area. ZAC contracts may also stipulate that planners can only sell certain businesses to food retailers, but in such cases public authorities lose control over the choice of subsequent purchasers or tenants and the target use of the premises.

If the intention is to safeguard food outlets, their establishment and land control must be taken into account in discussions between planners and the municipality, and when drawing up the technical specifications.

When the commercial premises are privately owned, public actors may also acquire the property by negotiation or by exercising urban and commercial pre-emptive rights on both the premises and business assets. These strategies may be applied with regard to both new and old buildings. After renovation, the public operator will select the tenants according to the target neighbourhood development plan, property opportunities and project developers. These urban renewal programmes often apply for a decade. In order to keep up the commercial momentum during this period, avoid short-term vacancy and appeal to project developers, the municipality can foster experimentation, consider temporary occupation of public premises by transient shops or business incubators.

On the Rue du Faubourg du Courreau, the public urban restoration operation led to the diver-sification of shops and contributed to a rapid change in the foodscape. In the 2000s, this gateway to the downtown area became materially deterio-rated and impoverished. In the early 2010s, articles in the regional press described a street that was declining, or even ‘deserted’, and noted an increase in ethnically-oriented shops (halal products, African hairdressers). Traditional food outlets were being replaced by mobile phone shops. A Google Street View image survey revealed a 15-20% vacancy rate between 2014 and 2019 amongst the 88 commercial premises along the street, i.e. much higher than in the rest of the city centre, with a rapid turnover of shops (Figure 1). Since then, commercial vacancy has decreased and the public urban renewal operation has appealed to more upmarket shops (bistro, renowned restaurant, beer cellar, record shop, organic grocery), while leading to gentrification of the neighbourhood. 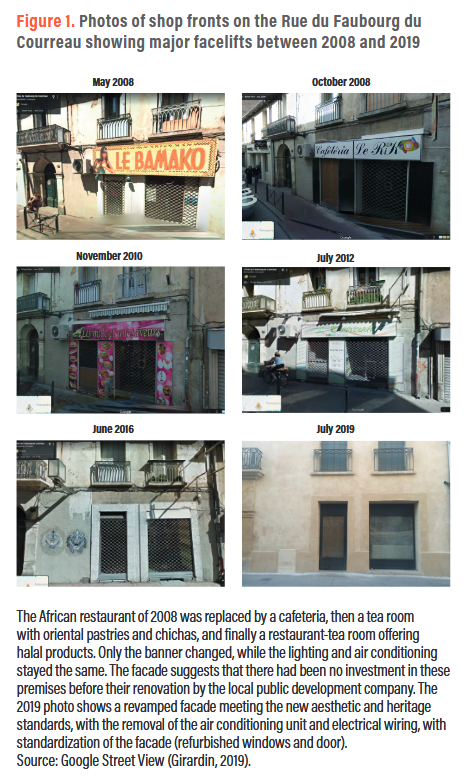 Fostering the aesthetic features and ambiance of the street

In addition to the commercial premises, the municipality can influence the aesthetic features and ambiance of the street to promote the shop attrac-tiveness and shopper footfall. In Rue du Faubourg du Courreau, the walkways have been widened and the rubbish bins and electrical wires buried. Within the framework of an ‘area for the enhancement of architecture and heritage’ (AVAP) classification and in line with the policy of safeguarding the historic downtown core of Montpellier, the restoration of facades became compulsory while being subsi-dized by the municipality. Heritage standards were imposed to regulate the appearance of shop fronts, even private ones. A shop front is an interface between a commercial outlet and the public space and is a major aspect of commercial design strat-egies. This has had a considerable impact on the signage and ambiance of the street, i.e. more aligned with the style of the city centre (Figure 1). Through such regulations, public authorities can greatly modify the image of a street and its shops, and therefore the shopping patterns.

Regulating the occupancy of public spaces by setting up markets, authorizing food trucks, restaurant or café terraces is an effective way for municipalities to change the foodscapes.

The municipality had recently created or redeveloped a market in all of the neighbourhoods studied. The aim was to supplement the local supply of fresh produce, sometimes via short supply chains, but also to liven up and occupy—sometimes just occasionally—public spaces. In most cases, the space was not initially designed to host a market, which meant that the municipality had to develop the site, equip it with water and electrical access facilities, and rethink the traffic flow and parking areas.

Municipalities can also steer the food supply and consumption patterns, while influencing the ambiance by authorizing restaurant and café terraces. The same applies to the presence of food trucks. Some municipalities prohibit them in public spaces, others authorize them in certain neighbourhoods, only around markets or during specific events. However, the fact that they are often present on private lots illustrates that food trucks can be a useful addition to the sometimes inadequate stationary food supply in, for instance, office, university or hospital areas.

Hence, in the Malbosc residential area—which was built in the 2000s as part of a ZAC initiative—there were still very few food shops present (a supermarket, bakery, restaurant and two fast food outlets). The people we met stressed the appeal of the weekly market created at the residents’ request (seven stalls) and the food trucks that regularly parked and set up on private plots. These mobile shops were not initially included in the development project, but they contributed to diversifying and supplementing the regular retail food supply.

Physical accessibility to shops is a major concern, especially car access in suburban municipalities and via other modes of transport in downtown area.

In city centres, the extent of shopper footfall in shops can be positively shaped by the pedestrianization of specific streets, the creation of one-way streets, car parks, tram stops, cycle lanes or cycle parking areas. Dovetailing the transport policy with the commercial strategy is a regular topic of debate between shopkeepers, public actors and users.

In the suburban villages of Sussargues and Saint-Drézéry, inhabitants who had been living in housing allotments for 30 years worked in other municipalities and travelled by car. Many shops closed down in the latter half of the 20th century, particularly those located in the old town centres with their narrow streets, because they were hard to bring up to standard and were poorly adapted to car access. The municipality of Saint-Drézéry recently addressed this issue of commercial decline in the village centre by building a new shopping centre at the periphery of the old centre. The presence of car parks, a healthcare centre and sports facilities, as well as the closeness of the school are features intended to encourage shopping and boost the viability of the food outlets (grocery shop, butcher’s shop, caterer, bakery, restaurant), which are now grouped together.

What kind of foodscape is sought?

Taking the time for dialogue

Before planning any developments, it is essential to organize site visits involving public actors, shopkeepers and users in order to reach a collective agreement on the suitable foodscape.

Some public interventions can indeed have a standardizing impact on foodscapes and exclude users under the guise of promoting positive eating behaviours for public health and for the ecological transition. Some city project claims to ‘requalify’ or ‘repair’ the commercial configuration are based on a moralizing and standardized view of food practices. Going to a shop selling festive sugar coated almonds, a pizza parlour or a halal butcher’s reflects attachment to a sociocultural milieu. Urban planning choices directly influence these food practices.

The economic, social and cultural accessibility of food shops must be taken into account in addition to their physical accessibility. It is therefore important to discuss the suitable foodscape with users so that they will not feel squeezed out by other users.

Public actors will be better able to influence the retail supply if they take these discussions into account and frame their commercial policy within an overall urban food supply strategy (Brand et al., 2017).

Accounting for food supply alternatives beyond the neighbourhood

Municipalities and residents are keen to have access to a diverse range of small food outlets in all neighbourhoods—these are promoted as local services in public actors’ declarations. However, this objective seems harder to achieve in some neighbourhoods.

In Saint-Martin, the commercial vacancy was reported as being problematic by shopkeepers and residents. The weekly market created in 2019 only had one remaining stall in 2021. Shopper traffic to one of the two small shopping centres was low. Three out of ten premises were vacant, including a former butcher shop. Some were only open in the evening. A grocer close to retirement said he could not find a buyer, mentioning that this was due to the proximity of a hypermarket and a hard discount store located in a nearby neighbourhood less than 10 min walking distance away. Yet the identification as a priority city neighbourhood entitled anyone wishing to set up a business in the neighbourhood to tax exemptions.

This situation illustrates the difficulty of maintaining a diversified local food supply. It also shows that it is impossible to understand foodscape patterns on a neighbourhood scale without taking the dynamics of surrounding neighbourhoods into account.

The analysis of changes in foodscape patterns in four sectors of Greater Montpellier highlighted contrasting urban dynamics and led to the identification of several levers for public action.

Municipalities can influence the commercial food supply but also the urban ambiance and shopper footfall in shops. The results of this analysis underline the usefulness of assessments carried out in collaboration with shopkeepers and residents, as well as the cross-cutting nature of the measures to be taken, while drawing on urban planning, heritage preservation, land management, transport and the regulation of public space occupancy patterns.

All urban development projects could thus include a food component. However, the temporary nature of shops is out of line with that of development operations. These interventions must therefore be part of a long-term urban food supply strategy, whereby food is mainstreamed into planning at different levels—neighbourhood, municipality and metropolitan area.

As part of the Surfood-Foodscapes project, an analysis of changes in foodscapes was conducted in four highly contrasted areas of Greater Montpellier (Girardin, 2019): 1) a former degraded neighbourhood undergoing urban revamping—rue du Faubourg du Courreau, 2) a mixed housing neighbourhood that emerged in the 1960s, partly designated as a priority city neighbourhood—Saint-Martin, 3) a new neighbourhood created in the 2000s through a concerted development area (ZAC) process—Malbosc, and 4) two periurban villages that have undergone high demographic growth over the past 30 years—Sussargues and Saint-Drézéry.

Foodscape is defined here as a set of visible elements related to food at the neighbourhood level, including the food supply scene—shops, restaurants, markets, etc. (Vonthron et al., 2020).