Proximity is not the sole factor influencing food outlet shopping patterns. Households do not frequent all available outlets in their vicinity, mainly because of the prices, products offered and opening hours.

Most food shopping is done in supermarkets, but this trend is far from being exclusive. Nearly 50% of households spend at least 30% of their food budget in other types of shops.

A current major societal challenge is to change eating behaviours in favour of a healthier and more sustainable diet accessible to all. The focus in recent years has been on informing, raising awareness and educating people to make better food choices for their health and the environment. Food behaviours are, however, not solely determined by people’s socioeconomic profiles, knowledge and intentions. They are also dependent on the foodscape (Vonthron et al., 2020)—defined here as all shops, markets and other food outlets around the home and, more generally, in the activity space, i.e. around home, work and other places of activity, as well as on the commute between these places.

The international literature reflects growing interest in the relationship between foodscapes, eating behaviours and related health outcomes (Sacks et al., 2019). In France, very few studies have been conducted on the relationships between foodscape and eating behaviours or weight status (Casey et al., 2012; Drewnowski et al., 2014; Caillavet et al., 2015). Moreover, most of these studies only examined part of the foodscape and associated food outlets—supermarkets, grocery stores and bakeries—while overlooking other types of supply outlets such as greengrocers, other specialized food shops, open-air markets, e-commerce and short supply chains, despite the increased consumer traffic to these outlets. The food environment is generally only considered around people’s residential area, while excluding the influence of non-residential places of activity and commute behaviours, whereas it ramifies far beyond. What are the features of the foodscapes in which people live and what are the food shopping practices of these inhabitants? Do they have ready access to food shops in their activity space? What food shopping outlets do they frequent and how do they dovetail them?

The Mont’Panier study addresses these questions by analysing links between the Greater Montpellier foodscape and inhabitants’ food purchasing behaviour. Foodscape and food purchasing practices are first characterized, then the relationships between them are analysed. This study focuses on different food shops: supermarkets, small grocery stores, open-air and covered markets, greengrocers, bakeries and other specialized food stores (butcher’s, fishmongers and dairy stores). Physical access to these shopping locations is studied in terms of their proximity to households and, more broadly, to the activity space.

The study results based on the foodscape mapping and inhabitants’ perceptions suggested that most households had no problem of physical access to the range of different food shops. Around half of the households surveyed lived within 500 m walking distance of a mini-market, grocery shop and other specialized shops, two-thirds of a bakery and one-third of a greengrocer. When also taking the main activity places of households and travel between these locations into account, a large majority had access to a hypermarket, supermarket, mini-market, grocery shop, greengrocer, bakery or another specialized shop in their activity space. Daily travel by households can thus provide access to a wide range of food shops, thereby offsetting the absence of shops near their homes. There was less access to markets than to other shops in the vicinity of people’s home or in their activity space.

The hard data (Figure 1) on distances to shops were consistent with household perceptions regarding their proximity to these shops. Households were well aware of the foodscape and surrounding food shops since around 80% of the survey respondents stated that they had a food shop (hypermarket, supermarket, grocery shop, mini-market, greengrocer or other specialized shop) around their home or the places they regularly frequented. Most of them were very satisfied (30%) or fairly satisfied (54%) with the food shops available to them (compared to 3% who were not at all satisfied and 12% who are not very satisfied). Among the improvements suggested to respondents, one of the preferred options was to have easier access to an open-air market (32%), followed by better access to cheaper food (31%), to gardening areas (25%) and to more nearby shops (21%). 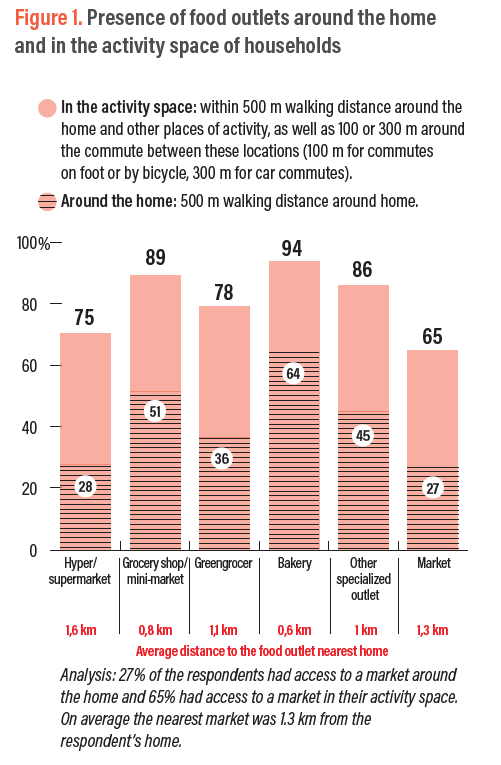 Barriers to shopping in accessible outlets

Proximity was not the only factor influencing food outlet shopping patterns. Not all households shopped in outlets located near their homes or regular activity places. Shopping in outlets viewed as being accessible by households varied according to the type of shop (Figure 2), and was highest for hypermarkets and supermarkets, followed by green-grocers, markets and organic food shops. Otherwise, less than a third of households shopped in grocery shops and specialized shops to which they claimed they had access.

Several factors underlie this phenomenon. The main reasons households did not frequent organic food shops and nearby outlets (grocery shops, mini-markets, greengrocers and other specialized shops) was that they considered the products or prices unsuitable. For supermarkets—apart from the fact that the products were not always considered suitable—some people stated they did not like this form of food outlet. The main reason households said they did not shop in markets was the short opening hours and their lack of time to go there. Hence, to encourage people to shop in nearby outlets, attention should be focused on prices, opening hours and the range of products offered. Other Surfood-Foodscapes project surveys have also highlighted the importance of factors such as atmosphere or accessibility by different modes of transport.

Supermarket shopping is a major but not exclusive choice 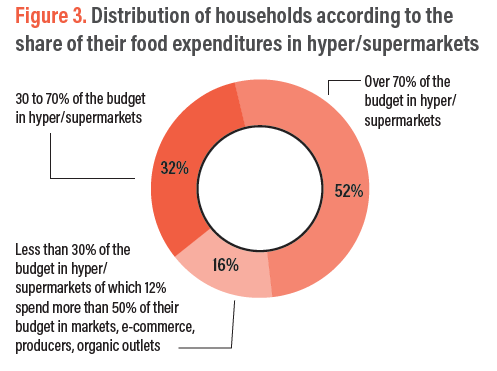 Despite the good media coverage, the so-called alternatives to supermarkets and conventional agriculture, i.e. buying directly or online from producers and specialized organic food shops, accounted for just a small share of food expenditures. Only 17% of respondents spent more than 20% of their food budget via these alternatives, or 29% if open-air and enclosed market purchases are included.

The study showed that Greater Montpellier inhabitants are generally satisfied with their foodscape. Geographical distance—and therefore physical access to food shops—is not an issue for most households. Daily travel provides access to a wide range of food outlets, except for markets. Even if activity spaces of households are considered, and not just proximity to the home, physical access to markets is more restricted than for other shops, thereby complicating shopping. Their limited opening hours also appeared to be a constraint for the households surveyed. To address these shortcomings, municipalities could create new markets, evenly distributed throughout the city and with extended or more diversified opening hours. The location of food shops and their physical accessibility are key foodscape features to be taken into account in urban planning, as also confirmed by other project results (see So What? No. 16 ‘Mapping inequalities in food outlet access in Greater Montpellier’). Other factors such as the products, prices and opening hours offered by the different types of food outlets also appear to be important in promoting more sustainable food shopping practices. Following this first characterization phase, the next step of the Mont’Panier study will be to analyse the relationship between the foodscape and the sustainability of household food shopping practices.

The Mont’Panier study is conducted in the framework of the Surfood-Foodscapes project. It is geared towards assessing relationships between foodscapes and household food purchasing behaviour in the Greater Montpellier area (France). An online survey of 710 volunteer households was conducted between 2018 and 2019 on their food purchasing practices and foodscape perceptions. Among these respondents, 408 households also collected their food purchase receipts and kept a food supply diary over a 1 month period (food purchased, donations and harvests, expenditures, food shopping locations, travel and modes of transport). Participants had to be of age, live in Montpellier or one of the 42 satellite communes and be at least partly responsible for the household food shopping. The survey was based on sociodemographic quotas: respondents were recruited to best reflect the local community composition in terms of age range (47% were over 50 years old, after adjustment to ensure a representative sample), household structure (44% of households had one adult without children) and income (23% with an individual income of less than €1,110/month). Average household food expenditure (n = 408) included 30% for fruit, vegetables, pulses and oilseeds, 21% for meat, eggs, fish and related products, 14% for cereal products, 13% for dairy and related products, 12% for water and other beverages, and 5% for sweet items. In addition to the food purchase data, all food outlets within the study area were mapped to highlight the actual foodscape. This encompassed the number and type of food shops, their location and distance from the respondents’ homes, workplaces and other activity places. 2019 / Urban foodscapes around the world

At the 5th Annual Gathering of the MUFPP, the Unesco Chair in World Food Systems organises a public session about an urban foodscapes world tour with (...)