The results of the JArDinS study—conducted in the Greater Montpellier area—did not reveal any changes towards more sustainable lifestyles among community garden users a year after they began participating in the garden.

Novice gardeners mentioned several difficulties in getting involved in their community garden, which they visited irregularly. This could explain why no lifestyle impact was noted.

The organization of community gardens should be revised to promote long-term integration and active participation of city dwellers (location close to their households, support and regular activities), thereby enhancing lifestyle sustainability.

With over 70% of Europe’s population living in cities, there is an urgent need to promote sustainable urban development that ensures community health, social inclusion, environmental protection and economic development. Urban green spaces are recognized as a vital element in the design of sustainable cities. They provide many health, social and environmental benefits, especially for the most vulnerable segments of the population (WHO Regional Office for Europe, 2016). Community gardens are among the different forms of green spaces. They may be individual and/or collective plots of land cultivated and managed by people living in the neighbour-hood. These gardens may be developed within the framework of city policies or urban renewal programmes. They mainly have a social and cultural function, but also contribute to more sustainable food systems by providing access to fresh and highly nutritional seasonal produce. The overall aim is thus to achieve more sustainable food systems.

The literature suggests that community gardens have many health benefits for users, including enhanced fruit and vegetable consumption, physical activity, as well as mental wellbeing and social bonding (Alaimo et al., 2016). Studies conducted to date have, however, mainly used qualitative or self-declared data and were cross-sectional, i.e. monitoring gardeners at a given time, sometimes comparing them with simultaneously monitored control non-gardeners. Yet the design of these cross-sectional studies does not enable assessment of causal links between community garden access and the adoption of healthier and generally more sustainable lifestyles (Tharrey and Darmon, 2021). Longitudinal studies to monitor gardeners over time—before and after their access to the community garden—would nevertheless enable analysis of this causal link. Moreover, as most of the above-mentioned studies were carried out in a North American setting—marked by the local urban, economic, political and social features—the results cannot be readily extrapolated to the French and European situation.

The JArDinS study (Urban Gardens for Sustainable and Healthy Diets) was launched to address these shortcomings (Tharrey et al., 2020). The study, conducted by INRAE researchers in Montpellier, assessed changes induced in people after a first year of participation in a community garden, according to the three dimensions of sustainability (social/health, environment and economy). This study focused on novice gardeners who were involved in a community garden for the first time and had never had a similar experience. This was done to ensure that their behaviour had not already been modified by a previous gardening activity. These newcomers were recruited on a voluntary basis in Montpellier in 2018. Those who agreed to participate in the JArDinS study (61% response rate) were mainly women (76%), with a high level of education (76% with a university degree) and without children (72%). The gardeners monitored (n = 66) were from 19 gardens, including either shared (68.2%) or individual (31.8%) plots. The average age when first participating in the garden was 44 years old. Any changes in gardeners’ behaviour after the first year were compared with a control group of non-gardeners (n = 66). 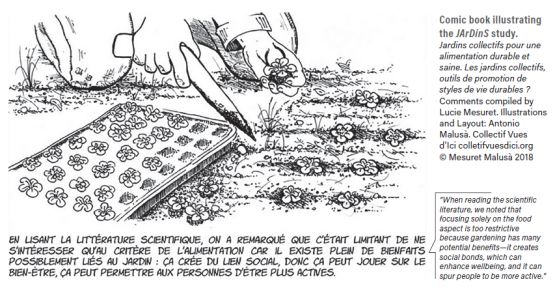 No impact of a first year of gardening

After the first year of gardening, the study revealed no changes in food supply sustainability, nor any improvement in physical activity, mental wellbeing, social bonding, awareness of food wastage or connection to nature. These results contrast with the findings of previously published cross-sectional studies, which highlighted the multiple benefits of gardens on the physical, mental and social health of users. Behavioural change mechanisms, particularly regarding food and physical activity, are relatively complex and a year of participation in community gardens may not be enough to change lifestyles. Yet school-based interventions have shown a beneficial effect of gardening on fruit and vegetable consumption at different timescales, ranging from 3 months to a year (Savoie-Roskos et al., 2017). In-depth interviews with 15 gardeners who took part in the study, a year after they had started gardening, enabled us to find answers that could explain this lack of effect. 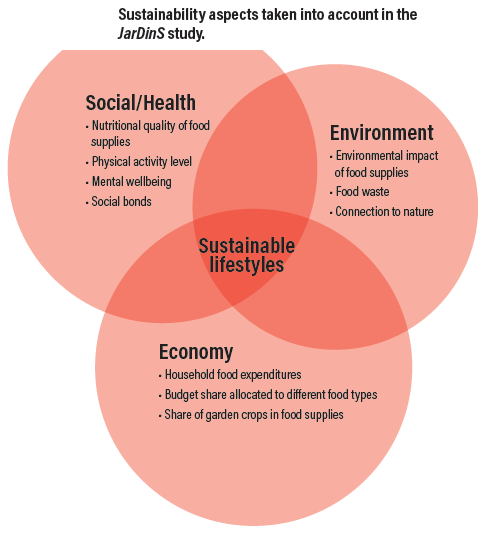 Obstacles to involvement in a community garden

In the qualitative interviews, gardeners described the difficulties they had in getting involved in the community garden during this first year of gardening experience. The main ones were their lack of time and knowledge about gardening, which was discouraging for some of the gardeners. Other elements mentioned by the gardeners were the physical burden of gardening, health problems or conflicts amongst gardeners. The number of visits to the garden was also relatively low, i.e. of the 66 gardeners monitored, 63% visited the garden less than once a month and 24% gave up going to the garden during the year. The lack of observed lifestyle changes could be explained by this insufficient and irregular gardening involvement. However, when the analysis focused only on the most active gardeners (visiting the garden at least once a month, n = 37) or on those who did not leave the garden during the year (n = 50), the conclusions were identical—no changes in gardeners’ lifestyle were observed. These findings should be interpreted with caution due to the small subsamples analysed, but they do suggest that even more intensive involvement in the garden (like that of the most active gardeners) would not be sufficient to have a lifestyle impact. In this respect, published evidence on the health benefits of gardens has mainly been revealed from gardening programmes in institutionalized settings (schools, hospitals or care centres) where the activity is regularly managed by professionals, usually with one gardening session a week. These conditions would be harder to apply in urban community gardens, where everyday life constraints may prevent gardeners from being as involved as they would like to be.

For gardeners, contact with nature was a key factor in determining their participation in the garden. Their main motives were to “handle soil and see plants grow” (83%), “relax” (81%) and “be in contact with nature” (79%), while the social contact and food production factors were mentioned less often (59% and 50% of the gardeners, respectively). The qualitative interviews confirmed some participants’ concern for ecological and environmental issues from the outset of their participation in the garden. Several gardeners also mentioned that they were already aware of food issues before getting involved in the garden. The present results suggest that the findings of earlier studies, which revealed more favourable health behaviours among gardeners (vs. non-gardeners), may have been subject to selection bias since the participants were not monitored over time. The gardeners surveyed likely had healthier and more sustainable lifestyles than the general population, even before they began participating in the garden. Moreover, gardeners with greater environmental and health awareness would likely be better able to cope with the challenges that arise in a community garden. These people may be more willing to fully commit themselves in the long-term to initiatives that they consider sustainable, such as involvement in a community garden. In the study, only active gardeners scored higher on the connection to nature scale when they first began participating in the garden than non-gardeners, while no difference was noted between less active gardeners and non-gardeners. This indicates that community gardens could be more conducive to sustainable lifestyles if at least they were more accessible to people with little awareness of sustainability issues.

Combined with a critical literature analysis on relationships between community gardens and health (Tharrey and Darmon, 2021), the JArDinS study has helped identify new avenues of research and focuses of action. The findings highlighted the shortcomings of current community garden formats in France. The organization of community gardens should now be revised to promote integration and active participation of city dwellers so that they will be a relevant mechanism to enhance lifestyle sustainability. Considering the obstacles identified, the creation of community gardens should be set up in the immediate vicinity of households in order to reduce gardeners’ stress linked with time and travel management. In the light of the convincing published results of gardening programmes in schools or medical facilities, the presence of supervisors who have practical gardening knowledge and encourage group dynamics would likely promote people’s long-term integration and participation. Finally, gardens that include both individual plots and community spaces could be more in tune with gardeners’ expectations while enabling everyone to manage his/her own gardening space. This would also provide an opportunity for interaction with other gardeners. As crop production is higher in single-plot family gardens, the assignment of small individual plots with available support from an expert gardener could actually boost production and thereby have positive impacts on diets, especially for disadvantaged people.

The JArDinS study was carried out under the Surfood-Foodscapes project. Novice gardeners were recruited in collaboration with local structures managing community gardens (Maisons pour tous [neighbourhood culture/recreational centres], associations, etc.). The inclusion criteria were as follows: over 18 years old, at least partly in charge of household food purchases, and belonging to a household in which no members had ever participated in a community garden. Meanwhile, non-gardener controls were recruited from the Mont’Panier survey, which was also conducted as part of the Surfood-Foodscapes project. The aim of Mont’Panier (conducted among 500 households) was to study relationships between the urban food environment and people’s eating habits. The controls were selected to be as similar as possible to the gardeners in sociodemographic terms (controls and gardeners were matched according to age, gender, household structure and income) and living environment (controls lived as close as possible to the gardeners or in a neighbourhood with similar features). The participants were surveyed when they first became involved in the community garden and again a year later to assess changes in their lifestyles relative to the non-gardener controls. The participants had: (i) collected their food receipts and listed all food supplies that entered their household over one month (food purchases, donations and garden crops); (ii) wore an accelerometer for 9 days to measure their physical activity; and (iii) filled out an online questionnaire.

Savoie-Roskos, M. R., Wengreen, H., & Durward, C. (2017). Increasing Fruit and Vegetable Intake among Children and Youth through Gardening-Based Interventions: A Systematic Review. Journal of the Academy of Nutrition and Dietetics, 117(2), 240–250.